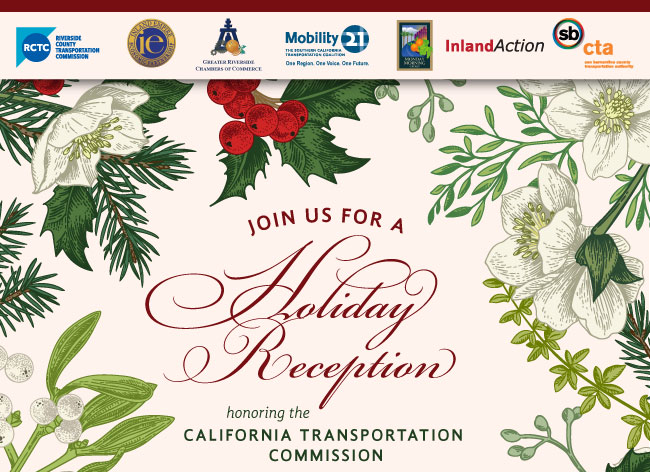 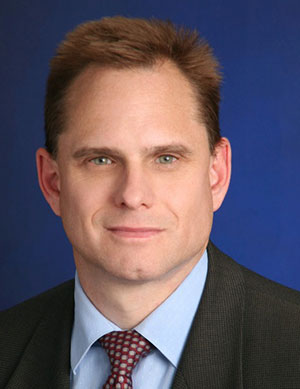 Kerry Cartwright is the Director of Goods Movement at the Port of Los Angeles. Prior to being hired in this position in 2007, he was the Director of Transportation Planning at the Port of Long Beach for over 10 years. He is responsible for the planning and conceptual design of landside access improvements, regional transportation planning, transportation funding, and transportation policy at the largest port in the western hemisphere. He has over 33 years of experience in traffic engineering and transportation planning and is a registered Traffic Engineer in the State of California and a registered Professional Engineer in Canada. He serves on numerous regional, state-wide, and federal transportation technical and policy committees. He currently serves on: the State of California’s Freight Advisory Committee; LA METRO’s Policy Advisory Council; the Coalition of America’s Gateways and Trade Corridors board of directors; freight policy committees for both the American Association of Port Authorities and California Association of Port Authorities; and Institute of Transportation Engineers (ITE) Goods Movement Council.

He is a past recipient of the Southern California Association of Governments’ “Regional Champion” and “ITE Innovative Intermodal Solutions for Urban Transportation” awards. Kerry obtained a B.Sc. in Civil Engineering from the University of Alberta, Canada. He is a former instructor for the Global Logistics Specialist® program at California State University, Long Beach as well as Harbor and Planning Commissioner for the City of Redondo Beach. 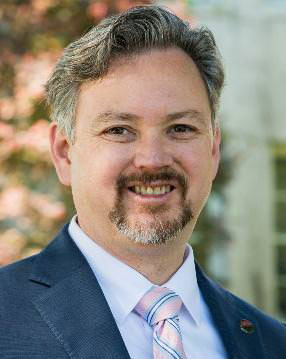 Paul Hubler has more than two decades of experience in transportation funding and policy development at the regional, state and national levels focused in particular on freight rail and highway projects. As Director of Government and Community Relations for the San Gabriel Valley Council of Governments (SGVCOG), Paul has been responsible for securing grant funding for the $1.8 billion Alameda Corridor-East program of freight rail-highway grade separations in Los Angeles County. The SGVCOG is also responsible for implementing the State Route 57/60 Confluence Chokepoint Project, a $420 million improvement to the second-highest truck accident location in Southern California and the fourth-most congested freight chokepoint in the nation.

Paul is serving a three-year term as Chairman of the Coalition for America’s Gateways and Trade Corridors, a 60-member advocacy coalition based in Washington, D.C. that advocated for the first dedicated federal funding for freight projects authorized at $2 billion a year in 2015. Paul has also been active in regional advocacy and public affairs. He was invited to join the Mobility 21 Advisory Board in 2015 and has served as President of the San Gabriel Valley Public Affairs Network for three years.

Paul received his bachelor’s degree from Pitzer College in Claremont and his master’s degree in public administration from the University of La Verne, where he serves as Chairman of the MPA Advisory Board. He is also past president of the Southern California Chapter of the American Society for Public Administration, the second largest chapter in the United States. Paul, his wife and teenage children live in Glendale. 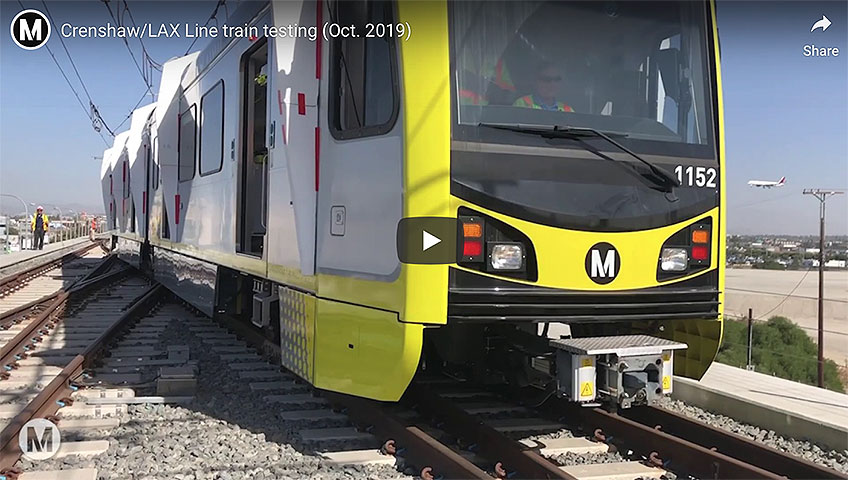 The Crenshaw/LAX Line reached a milestone this month with the beginning of train testing on a 1.4-mile segment of track adjacent to LAX — the southernmost part of the project. Check out the above video.

In that segment, trains are now being powered by the overhead wires and reaching regular speeds. Signal and systems testing began in September, when a train first traveled from the Green Line tracks onto the new Crenshaw/LAX Line tracks. The overall project is 93 percent complete and we’re definitely seeing progress — although there is still work, testing and training to be done.

Earlier this fall Metro and Walsh Shea Corridor Constructors (WSCC) — the contractor building the project — performed clearance testing. At very slow speeds, a train car was outfitted with foam shells on its side to ensure the vehicle cleared all structures such as platforms and other equipment that are next to the tracks. Staff inside and outside the train made sure everything worked as it should. That included keeping an eye on the overhead wires and the pantograph — the “arm” mounted on the roof of the train to collect power from the wires.

The testing has been successful so far and couldn’t have been done without diligent work of both Metro and WSCC staff.

We’d like to give a shout out to two train operators in particular:

Cora “CoCo” Lewis has been with LA Metro for over 30 years. Having started at Metro at the age of 21, Cora operated buses for about 10 years before becoming a train operator. She celebrated her birthday on the second day of the Crenshaw testing — last Thursday — and was the first to run a train at 55 mph. See more of Cora and other female trailblazers at Metro!

Ramtin Gholigadeh has been with Metro for over 33 years. Ramtin started his career in the late 1980s and began as a train operator in the early days of the A Line (Blue) in 1993. He is glad to see the much-needed A Line renovations take place over the past several months.

The Crenshaw/LAX Line began construction in 2014. An opening date hasn’t yet been announced but substantial completion is expected in 2020.  The 8.5-mile, $2.1-billion project — with underground, street level and aerial sections — will run between the Green Line and Expo Line with eight new stations.

Separately, a ninth station will be built at Aviation Boulevard and 96th Street and will provide connections between Metro Rail and the future LAX people mover that will serve airport terminals. 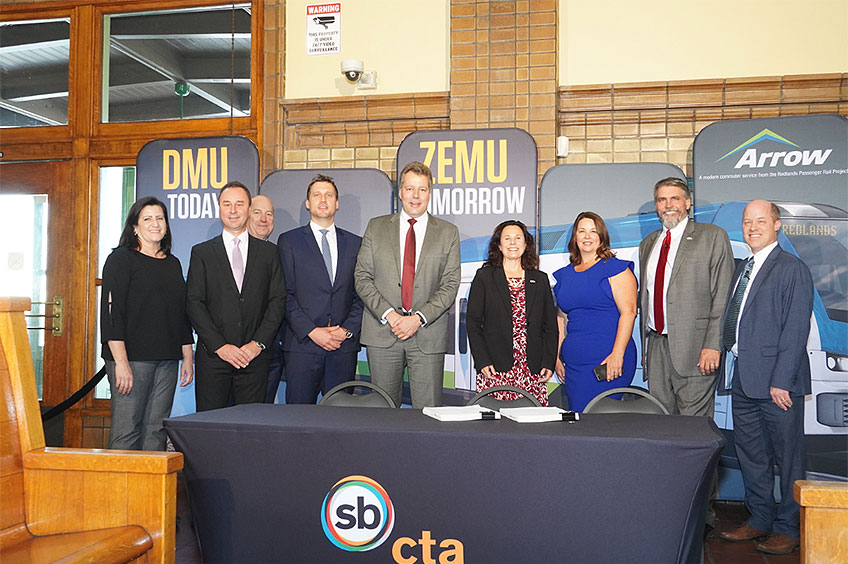 SBCTA President Darcy McNaboe, CalSTA Chief Deputy Secretary for Rail and Transit Chad Edison, and Stadler US CEO Martin Ritter are joined by members of the SBCTA and Stadler Rail teams on a historic day in San Bernardino County. SBCTA signed a contract with Stadler US to develop the first hydrogen-powered train in the United States.

Stadler U.S. and the San Bernardino County Transportation Authority (SBCTA) signed contracts on Nov. 13, clearing the way for the first hydrogen-powered passenger train to operate in the United States.

The agreement marks a major milestone in bringing zero-emission passenger rail technology to the U.S. The hydrogen-powered FLIRT H2 vehicle will be introduced in 2024 as part of the Redlands Passenger Rail Project, a nine-mile connector between Redlands and San Bernardino’s Metrolink station.

Under the agreement, Stadler will develop the first hydrogen-powered train. The ordered vehicle consists of two cars with a power pack in between. This holds the fuel cells and the hydrogen tanks. The train is expected to have seating space for 108 passengers and in addition generous standing room. The FLIRT H2 is projected to transport passengers with a maximum speed of up to 79 mph (130 km/h). The predicted delivery is in the year 2023. The train is scheduled to enter passenger service in 2024.

“Implementing innovative solutions like this first-of-its-kind passenger train is an excellent example of how we are demonstrating our commitment to the next generation in San Bernardino County,” SBCTA President Darcy McNaboe said. “The hydrogen FLIRT will help us address the commuting needs of today while preserving our environment for a better tomorrow.”

“Stadler is committed to designing and building green technology for the transportation industry. We are delighted that SBCTA shares our enthusiasm for this goal. We have an excellent relationship with SBCTA, and it is a great honor to partner with them to bring the first hydrogen-powered train to the United States,” said Martin Ritter, CEO of Stadler US Inc.

Stadler and SBCTA started their partnership in 2017, when SBCTA ordered three diesel electric multiple unit (DMU) FLIRT. The three DMU are intended for the future Arrow Passenger Rail Service, scheduled to run between Redlands and San Bernardino, connecting to the entire Metrolink system at the San Bernardino Transit Center. 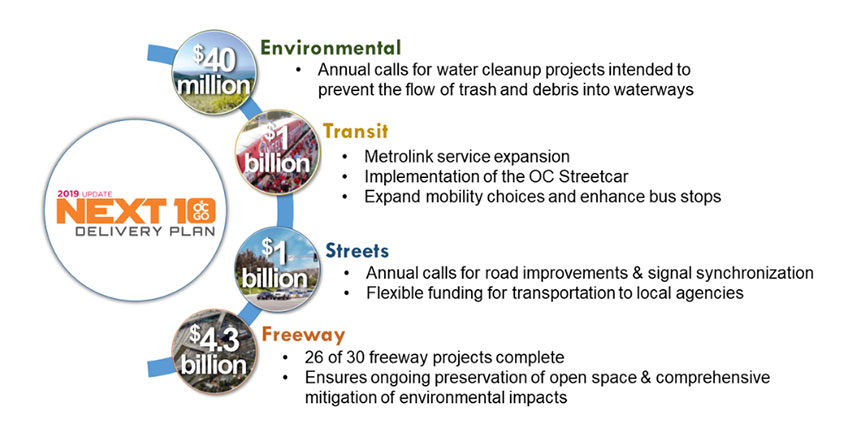 The Orange County Transportation Authority (OCTA) board has adopted the 2019 Measure M2 Next 10 Delivery Plan, reflecting a balanced transportation system that supports sustainability while making improvements to freeways, streets and transit service throughout Orange County.

The Next 10 Plan, which sets project and program priorities over a 10-year period through 2026, aims to deliver transportation improvements promised to voters through Measure M as early as possible.

The plan, approved by the OCTA board in November, was updated in response to a new revenue forecast for Measure M, Orange County’s half-cent sales tax for transportation improvements, also known as OC Go. Measure M is expected to generate $13.4 billion through 2041, an increase of $300 million compared to last year’s sales tax revenue forecast, the first forecasted increase since 2014.

The Next 10 Plan calls for:

For more information on how OC Go funds are helping to improve transportation, visit www.octa.net/MeasureM. 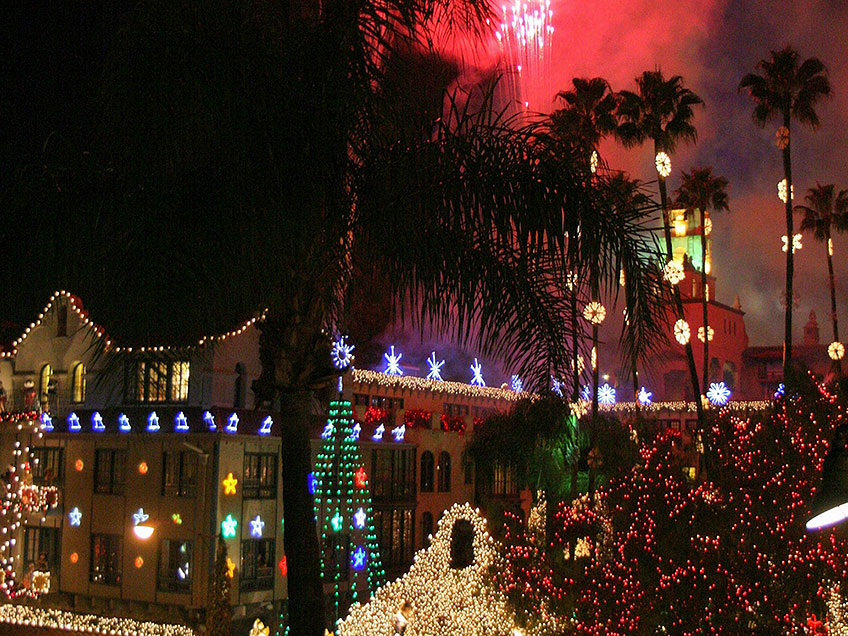 With more than five million lights, the Mission Inn Hotel & Spa’s 27th Annual Festival of Lights is a go-to event in Riverside. Experience the joy by riding Metrolink on Fridays and Saturdays to downtown Riverside.

It’s the most wonderful time of the year! Riverside is preparing to celebrate the season with the Mission Inn Hotel & Spa’s 27th annual Festival of Lights, beginning with the “Switch-On Ceremony” on November 29 and continuing through December 21. Avoid the hassles of traffic and parking by riding Metrolink to enjoy the downtown fun.

Experience holiday decorations and more than five million lights, the Artisans Collective with original art and free public arts workshops, lighted displays, horse-drawn carriages, carousel and Century Wheel rides, food galore (mini fried doughnuts, anyone?), the UCR Snow Globe with a 14-foot replica of the University’s Bell Tower, and, of course, Santa Claus. And don’t forget to add some excitement to your visit with live music and dance at the Entertainment Stage near City Hall.

Metrolink is ready to take you there from Perris, Orange County, and Riverside County for just $7 round trip for adults and seniors; up to three children 18 and under ride free per adult. The Festival of Lights Train will run on Fridays from Los Angeles Union Station and Orange County. Saturday service includes rides from Perris. After reaching the Riverside-Downtown Station, passengers can ride a free Riverside Transit Agency shuttle or walk .8 miles to the heart of the festival. For the trip home, be sure to board the shuttle at least 45 minutes before your train leaves the station.

The Festival of Lights is rated as one of USA Today’s 10 best public holiday lights displays. To move Riverside to the top of the leaderboard (it’s trailing Duluth, Minnesota and Springfield, Massachusetts), vote up to once daily. 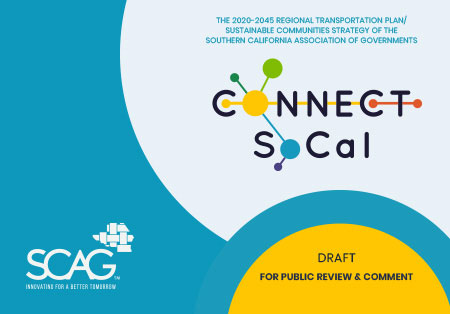 SCAG recently released the draft Connect SoCal plan, the 2020-2045 Regional Transportation Plan/Sustainable Communities Strategy, for public review and comment. The plan is a follow up to SCAG’s 2016 RTP/SCS vision that balances future mobility and housing needs with economic, environmental and public health goals. It will help guide the region’s growth and includes thousands of planned transportation improvements and land use ideas to shape the future of Southern California.

Connect SoCal was developed by SCAG’s staff as part of an extensive planning and visioning process that included the active engagement of residents and stakeholders across the region. The Draft Connect SoCal plan and 20 technical reports supporting the draft plan are available for download now. During the 10-week comment period, which will run through Jan. 24, 2020, SCAG will hold three public hearings and 21 briefings for local elected officials throughout the region. To provide feedback or find more details on public events, visit connectsocal.org.