Early bird registration is now open for the Mobility 21 Summit — California’s largest one-day transportation conference and expo on Friday, Sept. 29 at the Disneyland Hotel in Anaheim. “Transforming California: Be a Change Agent for Transportation,” the theme of this year’s Summit, promises to bring together more than 1,100 transportation stakeholders, industry leaders and elected officials to share ideas on easing congestion, creating jobs and improving quality of life.

Are you still thinking about sponsoring the Summit? It’s not too late! Help support Southern California’s transportation future while getting the best access, visibility and value for your marketing dollar. Contact Jenny Larios to sign up today. 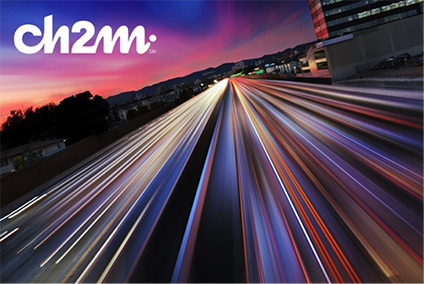 CH2M is proud to partner with local agencies to turn transportation challenges into opportunites for all Angelenos.

CH2M is a proud partner of Mobility 21, its board members and membership as we all work to improve our transportation and make Southern California the infrastructure capitol of the world. For over 40 years, CH2M has helped the region’s transportation providers and we look forward to helping our partners ease traffic congestion, improve system connectivity and resiliency, and support economic growth in Southern California.

With several locations throughout Southern California, our people have contributed on a multitude of significant projects that improve mobility. These projects include the Port of Los Angeles’ TraPac Automated Terminal, the City of Los Angeles 6th Street Bridge, the Los Angeles-San Diego High-Speed Rail project section, the I-5 Managed Lanes in North Los Angeles County, and the Metro Gold Line Foothill Extension.

At CH2M, we go beyond what we build in our community by partnering with organizations that make a difference to promote STEM education and create sustainable communities. Our people take the firm’s values to heart through their dedication to volunteering with non-profits, and mentoring students and small businesses. In 2016 CH2M became the first professional services firm honored with the World Environment Center Gold Medal Award for efforts advancing sustainable development.

Since 1919, Skanska has worked to keep Southern California moving, building the projects that matter to people and businesses. We share Mobilty 21’s goals to bring together all regional stakeholders to plan and build the transportation solutions that will allow our communities to thrive for generations.

We’re already seeing how these collaborations are creating new possibilities. Design-build transit projects, such as the recently-completed Expo Line Phase 2 extension, are bringing predictable commute times between communities for the first time in years. Potential public-private partnerships could bring new possibilities from our airports to our freeways. From the Inland Empire to Orange County’s beaches to downtown LA, new transportation construction projects should mean fewer backups and more opportunities.

Those opportunities extend to local small businesses throughout Southern California. On all of its projects, Skanska leads outreach and training programs that not only help small firms work on Skanska projects, but also position themselves to win work throughout the region.

It’s all part of Skanska’s commitment to building safely, ethically and collaboratively with our customers and their stakeholders. We’re proud to support Mobility 21 and its vision for Southern California communities.

Sara Costin Mockus of Costin Outreach Group (COG) has assisted Mobility 21 for the past five years. Her name may be familiar to you because she is responsible for managing registration, the expo and volunteers at our annual Summit.

COG’s philosophy is that every stakeholder in every community should be involved in delivering a result. Their expertise is rooted in understanding the details and lexicon of your project. From reading plans and profiles to hosting one-on-one, elected official and open house meetings, to ensuring that stakeholders are educated and knowledgeable about construction, COG translates the technical documents so that every stakeholder is equipped to engage in a dialogue with you and your community. 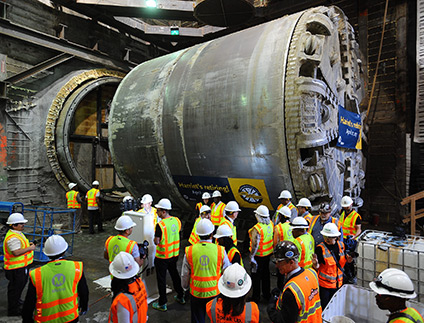 Part of the tunnel boring maching used to dig the underground section of the Crenshaw/LAX Line. Photo by Juan Ocampo for Metro.

The TBM was named after Harriet Tubman, the famous African-American abolitionist and humanitarian who helped slaves escape the South using a network of safe houses known as the Underground Railroad.

A ninth station — to be built separate from this project — will be located at Aviation Boulevard and 96th Street and will be the transfer point between Metro Rail and an automated people mover that will serve the LAX terminals. Los Angeles World Airports is building the people mover and has targeted a 2023 completion date.

Early next year, construction begins on a $455 million project to add two Express Lanes in each direction along 15 miles of Interstate 15 (I-15) in Northwest Riverside County. In early April, a significant milestone in advancing the project took place when the Riverside County Transportation Commission (RCTC) awarded a $263.4 million design-build contract to Skanska-Ames, a Joint Venture.

The I-15 Express Lanes Project adds two tolled, express lanes between State Route 60 and Cajalco Road. When complete, it will become an important north/south corridor in Riverside County’s network of toll lanes and will join the recently-completed 91 Express Lanes extension in Corona.

Unlike the 91 Express Lanes project, the I-15 Express Lanes will not require extensive land acquisition and the majority of construction work will take place in the undeveloped part of the freeway median, thus minimizing work-related impacts on local residents and businesses.

The new Express Lanes facility travels through the cities of Jurupa Valley, Eastvale, Norco and Corona as well as nearby unincorporated communities in Riverside County.

The contract award for the I-15 comes on the heels of recent legislative action to appropriate $427 million for a number of construction projects nearby the I-15 including an improved interchange at Limonite Avenue and another direct connector between the 91 and I-15.

“Over the next five years there will be over a billion dollars in transportation in Riverside County,” said Riverside County Supervisor John Tavaglione who also serves as RCTC Chairman. “That kind of investment creates thousands of quality jobs and provides a huge shot in the arm for the local economy.”

“I am thrilled to have Skanska-Ames on board and am especially appreciative of the additional state funding that we are receiving from Senate Bill 132 and the work of Senator Roth and Assemblywoman Cervantes.”

Senate Bill 132 appropriates $427 million in expanded gas tax revenue for five projects known as the Riverside County Transportation Efficiency Corridor. The projects include a new toll connector between the eastbound 91 and the Northbound 1-15, widening of the Hamner Street Bridge, railroad grade separations at Jurupa Avenue and McKinley Street and interchange improvements at Limonite Avenue and the I-15.

“All of the funding for the freeway, interchange and bridge projects provide needed mobility benefits along the I-15 Commuter Corridor and the railroad grade separations are important freight investments that will save lives and protect local communities,” Supervisor Tavaglione said.

“I am especially appreciative of the additional state funding that we are receiving from Senate Bill 132 and the work of Senator Roth and Assemblywoman Cervantes.”

The Measure M Taxpayers Oversight Committee has determined that Measure M is being delivered as promised to Orange County voters for the 26th consecutive year.

The OCTA board of directors on Monday reviewed the committee’s findings. The Taxpayer Oversight Committee held its annual Measure M public hearing April 13 and unanimously found that the Orange County Transportation Authority is proceeding in accordance with the ordinances that were first approved by voters in 1990 and renewed by 70 percent of voters in 2006.

The independent, 11-member oversight committee was formed to monitor OCTA’s use of Measure M funding, approve all changes to the Measure M plan and hold annual public hearings on the expenditure of funds generated by the sales-tax measure.

“The Taxpayer Oversight Committee is vital to ensuring that Orange County residents receive all of the improvements promised to them through Measure M,” said OCTA Chairman Michael Hennessey. “We are very proud that for the 26th consecutive year, an independent review has found OCTA is safeguarding and properly administering the tax dollars entrusted to our agency.”

The original Measure M made possible more than $4 billion worth of transportation improvements to help Orange County residents, workers and visitors travel more efficiently throughout all parts of the county.

For more information about Measure M or the Taxpayers Oversight Committee, visit www.octa.net/TOC. Landscaping With Beauty and Brains

Orange County’s coastal sage scrub and chaparral habitats are in beautiful bloom along The Toll Roads. You might be surprised to know that the science behind the habitat landscapes makes it as smart as it is beautiful.

Biologist Art Homrighausen has worked on The Toll Roads’ environmental mitigation and restoration plans for nearly 30 years. He agrees with most Orange County residents that the 2017 spring bloom is one of the lushest in recent memory. He said one reason for the spectacle is that heavy winter rains came early and lasted the perfect amount of time to soak seeds and drought-dormant plants as they prepared to bloom.

Along The Toll Roads, nature’s bright show has been more than 25 years in the making. The slopes and nearby hillsides were first seeded with a mix of native plants back in the late 1990s, when State Routes 73, 133, 241 and 261 opened. Custom seed mixes designed for each site’s sun and moisture conditions sprouted into the mix of wildflowers, sages and shrubs seen today.

“We tried to duplicate the habitat that was there before The Toll Roads’ construction,” Homrighausen said. A broad range of species were planted—from small flowers to large shrubs. For the first few years, the Transportation Corridor Agencies’ (TCA) team of environmental specialists watered and weeded the new plantings. Once the plants were established, Homrighausen said TCA “let nature decide what was good for the area.”

The sustenance of the area’s California gnatcatcher population over decades is one way TCA knows the planning and planting were successful. Today, the small birds nest in sagebrush and eat insects attracted to the wildflowers and other plants. The colorful spring views for drivers along The Toll Roads are just a beautiful bonus.

The Southern California Association of Governments (SCAG) is pleased to share an exciting program for its 52nd Annual Regional Conference and General Assembly. This year’s conference, “Innovating for a Better Tomorrow,” will be held May 4-5 at the JW Marriott Desert Springs Resort & Spa in Palm Desert. The conference program includes guest speakers and breakout panels on a variety of topics including housing, smart city infrastructure and how automation and artificial intelligence will impact the future workforce. At the conference luncheon, SCAG will also present the winners of the 2017 Sustainability Awards, the region’s highest honors for projects that promote and improve mobility, livability, prosperity and sustainability in Southern California. This year, a total of seven planning projects were selected. For more information, visit the conference website.