Please join the Mobility 21 Board of Directors and Advisory Board Members in honoring California’s transportation leaders at a reception in Sacramento. 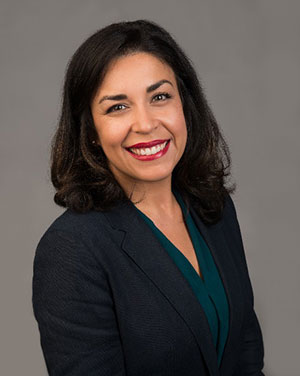 Gabriela Collins is a Senior Policy Advisor for Local Public Affairs at Southern California Edison (SCE), where she manages external engagement for high profile policy objectives and projects. Currently, Gabriela leads a multi-disciplinary team tasked with educating and mobilizing stakeholders in support of the company’s efforts around vehicle electrification to help achieve the state’s ambitious climate and air quality goals.

Known for her ability to dissect complex issues and develop issue-based and results-driven action plans, Gabriela provides strategic counsel on matters at the intersection of energy and transportation, and plays a key role in developing local, regional and state-level policy campaigns to support investment in public infrastructure and clean energy.

Before joining SCE, Gabriela designed, implemented, and managed a public outreach program to support the planning, design, and construction of the Expo Light Rail Line, a high-profile transit project with complex political, regulatory and legal challenges. She led an advocacy campaign targeted at policymakers and stakeholders that helped secure environmental clearance and project approval, manage community expectations, mitigate construction impacts, and ultimately deliver the project on time and on budget.

Prior to her work in the transportation sector, Gabriela directed stakeholder engagement in the development and execution of new facilities for the Los Angeles Unified School District. She engaged diverse sectors of the community, elected officials and regulatory agencies in developing new school and modernization projects, from site selection through construction, helping deliver approximately 20 new facilities. 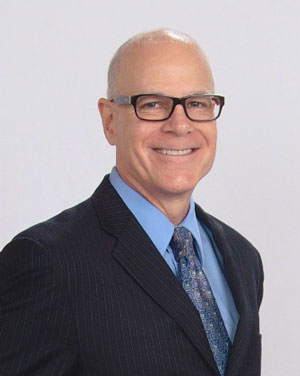 Art Hadnett, Senior Vice President, brings more than 30 years of infrastructure and transportation experience on high-profile megaprojects in the West and throughout the United States. As HNTB’s Regional Growth Officer, Hadnett oversees vital and complex infrastructure programs in growth markets, including rail, transit, architecture, tolling and aviation. He partners with the corporate leadership team on strategic growth planning and initiatives for the development of new business for markets and services throughout the Western Region. He is based in HNTB’s Los Angeles office.

Prior to this role, Hadnett served as West Division President, leading the operations of the nine-state division, including 11 offices and more than 700 employees. Before joining HNTB, Hadnett served as vice president and practice leader for Stantec’s transportation division where he was responsible for managing major assignments with the Los Angeles County Metropolitan Transportation Authority, Orange County Transportation Authority, Los Angeles World Airports and Southern California Regional Rail Authority. He is past president of the Los Angeles County Chapter of American Council of Engineering Companies and also a member of Women’s Transportation Seminar and Construction Management Association of America.

Founded in 1914, HNTB has built a reputation for excellence and innovation. HNTB has helped create infrastructure that best meets the unique demands of the environment. With client relationships spanning decades, we understand infrastructure life cycles and have the perspective to solve technical challenges with imagination. HNTB is a privately held, employee-owned firm, with nearly 4,000 employees in 70 locations nationwide and 500+ employees in the Western Division. 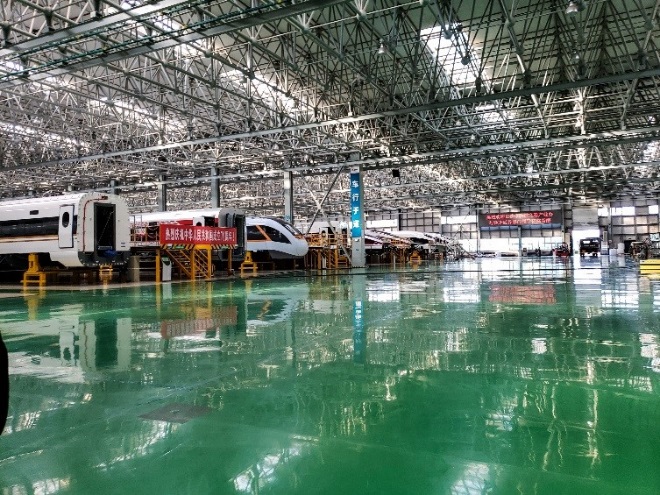 In 2016, the Metro Board of Directors approved a contract with China Railway Rolling Stock Corporation (CRRC) for 64 new HR4000 subway vehicles that will be used on the Red and Purple Lines. The contract also includes five options for an additional 218 vehicles. With the Purple Line being extended nine miles to Westwood, Metro needs new rail vehicles to maintain service levels, as well as replacement vehicles for the aging vehicles in the Metro fleet — the average age of current vehicles is more than 20 years old.

Manufacturing of the exterior shell of the subway is currently taking place in China. Recently, Metro staff visited the CRRC rail facility to view a mock-up of the HR4000. The mock-up is one-third the size of a standard rail car; the idea is to give an advanced look and feel of the proposed design and function of the new rail cars.

The most noticeable design change is the bench seating! The side-facing seating configuration allows for a wider walkway and more room for standing passengers. Many other metro systems around the world also use bench seating on their trains, whether exclusively or in some combination of side-facing and front-facing. These include subways in Toronto, New York City, Beijing and London.

Some other changes include an illuminated line map, USB ports for passenger use and a new design in the bike area that will offer a strap to secure bikes. Please note this is only a mock-up, and final design may be subject to change.

Final assembly will take place in Springfield, Mass. A new facility is planned for the L.A. area to manufacture some of the components of the rail cars. Metro expects to receive pilot HR4000 vehicles in December 2020 and testing will follow.

Here are some more renderings of the new subway vehicles: 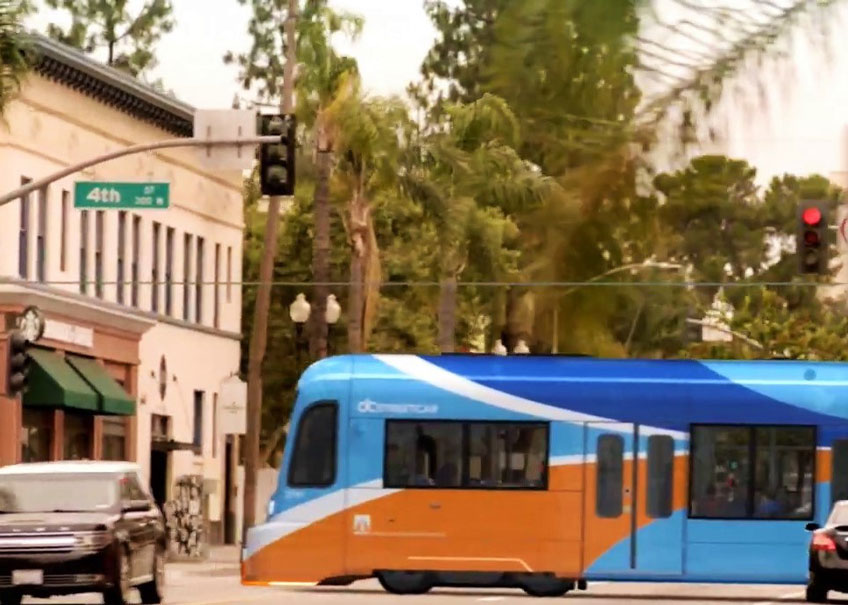 A photo simulation shows what the OC Streetcar will look like traveling along Fourth Street in Santa Ana. Construction on the 4.1-mile project, led by the Orange County Transportation Authority, has been underway for a year and is on track for testing and operations of the OC Streetcar to begin in 2022. Photo courtesy of OCTA.

Construction on Orange County’s first modern electric streetcar is well underway one year after the signing of a full-funding grant agreement and groundbreaking on the project, and a new mobile app makes it simple to get updated project information.

With the arrival of the holiday season, a construction recess was put in place on Fourth Street until the start of 2020, allowing optimum access to businesses in the area for holiday shopping, dining and entertainment.

Construction activities continue elsewhere on the 4.1-mile streetcar route between the Santa Ana Regional Transportation Center and a new transit stop at Harbor Boulevard in Garden Grove. Those activities include:

The Orange County Transportation Authority, which is leading construction of the project, continues to work closely with officials from the Federal Transit Administration, which awarded a $149 million federal funding grant to the project one year ago, allowing construction to begin.

Along with other federal money, that funding is expected to pay for more than half of the $408 million project. Other funds come from Measure M, Orange County’s half-cent sales tax for transportation improvements, also known as OC Go.

The OC Streetcar route will serve Santa Ana’s thriving downtown and dense employment areas that include county and local government offices and courthouses in the Civic Center. The streetcar will carry passengers between the busy Santa Ana transit center and a transit stop at Harbor Boulevard and Westminster Avenue in Garden Grove, running along Santa Ana Boulevard, Fourth Street and the Pacific Electric right-of-way and connecting with OCTA’s busiest bus routes.

Six vehicles – with two spares – will operate daily, making stops at 10 locations in each direction every 10 to 15 minutes. Construction on the Siemens S70 streetcar vehicles began in September.

The project is on track to begin testing and operations in early 2022.

OCTA has created a new mobile app making it easier to get all the project information in a few swipes, including work locations, a business resource guide and project photos. The free OC Streetcar app can be downloaded via the Apple Store and for Android devices at Google Play.

For more information on the project, visit www.ocstreetcar.com. 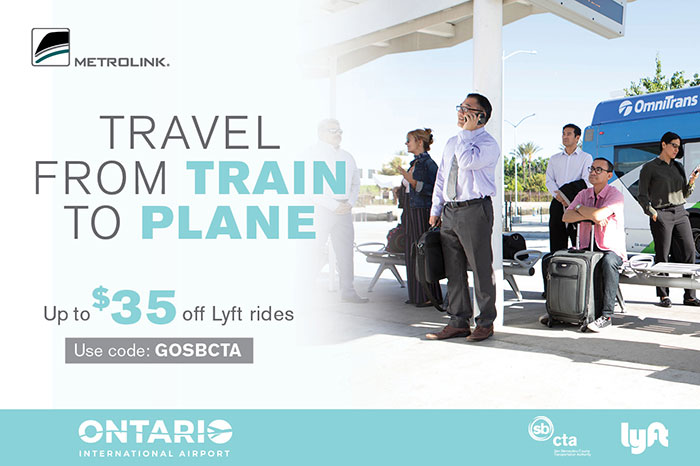 SBCTA Partnering with Metrolink to Give Passengers a “Lyft” to ONT

Alan Wapner, President of the Ontario International Airport Authority (OIAA) who also serves on the Boards of Directors of Metrolink and SBCTA, described the partnership as an important next step in making sure ONT meets the needs of one of the fastest-growing population and economic centers in the United States.

“A big part of what sets Ontario International Airport apart is its access and convenience, and as an airport authority, we are committed to exploring all options that allow us to maintain that competitive edge, increase commuter and transit options and grow the right way,” Wapner said.

The program covers up to $35 off each Lyft ride connecting ONT with one of the Metrolink stations at Montclair, Upland, Rancho Cucamonga and Ontario-East. SBCTA is funding the $396,000 pilot program to increase public transportation ridership servicing ONT.

“Local control of the Ontario International Airport has spurred significant, positive, change for one of our county’s greatest assets,” SBCTA President Darcy McNaboe said. “To enthusiastically support this change, we are creating a pilot program that helps connect transit to the airport. The information we gather from this program will help us develop future connections that will ease congestion, improve communities, and continue to make San Bernardino County great.”

The Metrolink Montclair, Upland and Rancho Cucamonga stations are on the San Bernardino Line, while the Ontario-East Station is part Metrolink’s Riverside Line.

“Through this partnership, travelers and workers alike have a convenient, reliable transportation option to get to and from the Ontario International Airport without needing to own or rent a car or worry about parking,” said Bakari Brock, senior director of City Partnerships at Lyft. “We’re proud to be working with SBCTA, Metrolink, Omnitrans and Ontario International airport to help improve connections between regional transit and airport.”

To participate in the program, riders need to enter the GOSBCTA code into the Promos field in the Lyft app one time, and the subsidy will apply automatically to any eligible ride; the code will automatically renew at the end of each month. Riders without smartphones can participate by calling 909-235-5544. Riders with specialized mobility needs, such as a motorized wheelchair, can also request an on-demand ride by calling 866-946-4938. Eligible trips run between ONT and one of the four Metrolink stations and take place during transit operation hours (3:30 a.m. to 12 a.m.).

For more information on the Lyft rides to and from ONT click here. 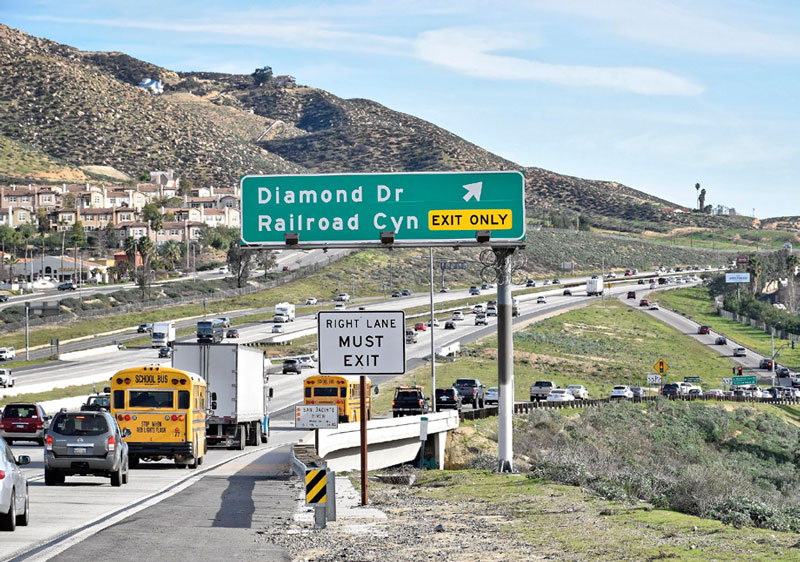 At long last, construction is set to start in spring 2020 on the I-15 Railroad Canyon interchange in Lake Elsinore.

Hallelujah! Construction is finally ready to start next spring on the Interstate 15 Railroad Canyon Interchange in Lake Elsinore, following the California Transportation Commission’s approval of $17.9 million in state funding on December 5.

The allocation makes up the balance needed to fully fund the estimated $45 million construction project. RCTC will lead the construction effort and is issuing invitations for bids.

“This project is long overdue,” said RCTC Commissioner and Lake Elsinore City Council Member Bob Magee.  “We have been working for nearly 20 years to make this project a reality, which is far too long. However, now that construction is right around the corner, we look forward to a safer, more efficient connection to I-15 and ask the public to be patient while construction is under way,” he said.

Other funding is provided by a combination of sources including the City of Lake Elsinore and local Transportation Uniform Mitigation Fees.

The project will result in several major changes to the current interchange that are intended to improve safety and reduce congestion, including:

Construction is expected to start in the spring and take about 2.5 years for the new interchange to open to drivers.