Please join the Mobility 21 Board of Directors and Advisory Board Members in honoring California’s transportation leaders at a reception in Sacramento.

Sponsor the Event
$2,000 Host Level
Includes complimentary attendance for 5 and logo on event marketing and signage

$1,000 Support Level
Includes complimentary attendance for 2 and logo on event marketing and signage 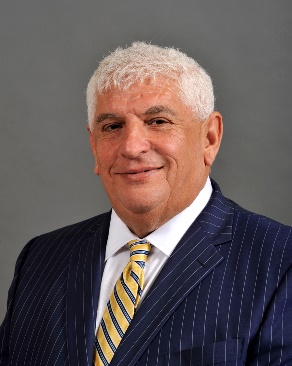 Considered one of the preeminent transportation planning experts in the nation, Hasan Ikhrata is the chief executive officer of the San Diego Association of Governments (SANDAG). SANDAG is the leading research, planning, and transportation agency for the San Diego region. The agency builds consensus; makes strategic plans; obtains and allocates resources; plans, engineers, and builds public transportation; and provides information on a broad range of topics pertinent to the region’s quality of life. Agency policymakers are elected officials from each of the area’s 18 cities and the county. Hasan leads a staff of nearly 400 professionals who develop public policy initiatives for elected officials on numerous issues encompassing population growth, transportation, environmental management, economic development, municipal finance, binational coordination, and public safety.

Hasan has more than 35 years of public and private sector transportation planning experience. As chief executive officer of SANDAG, he directs day‐to‐day operations of the agency and implements policies set by its Board of Directors. In addition, Hasan is the chief executive officer of the SANDAG Service Bureau, the nonprofit public benefit corporation chartered by SANDAG.

Hasan is an adjunct professor in the business school at California State University, Northridge, and serves as a mentor for graduate students at UCLA Luskin School of Public Affairs. 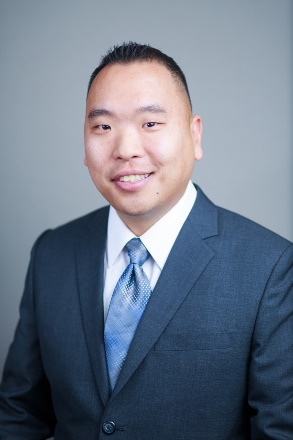 Ricky Choi is Director of Government and Community Relations at the San Gabriel Valley Council of Governments (SGVCOG) and is responsible for overseeing local, state and federal public policy and legislative advocacy, public outreach and stakeholder engagement for the Alameda Corridor-East program of freight rail-highway grade separations in Los Angeles County. He has nearly two decades of extensive experience in local and state government, public affairs and strategic communications. Ricky has led the execution of construction outreach for a broad range of capital and transportation infrastructure projects, directed grant funding and government affairs efforts, and has supported regulatory compliance and infrastructure program oversight and implementation, including project development, environmental clearance, property acquisition and construction.

Ricky was named to the 40 Under 40 List by the National Association of Asian Pacifics in Politics and Public Affairs. Prior to joining the SGVCOG, he was Communications Director at BuildLACCD, Community Relations Manager at the Alameda Corridor-East Construction Authority, and a key community liaison and advisor in the California State Assembly, California State Board of Equalization and the Office of the California Lieutenant Governor.

Ricky is Planning Commissioner in the City of Monterey Park and currently serves as Board President of the Asian Youth Center, a non-profit organization whose mission is to empower low-income, immigrant, and at-risk youth. He is a member of the Coalition for America’s Gateways and Trade Corridors, Legislative Action Committee of the San Gabriel Valley Economic Partnership, Government Affairs Committee of the Regional Chamber of Commerce – San Gabriel Valley, and Advocacy Committee of the Asian Business Association of Los Angeles. Ricky graduated from UCLA with a bachelor’s degree in Political Science and a minor in Public Policy. 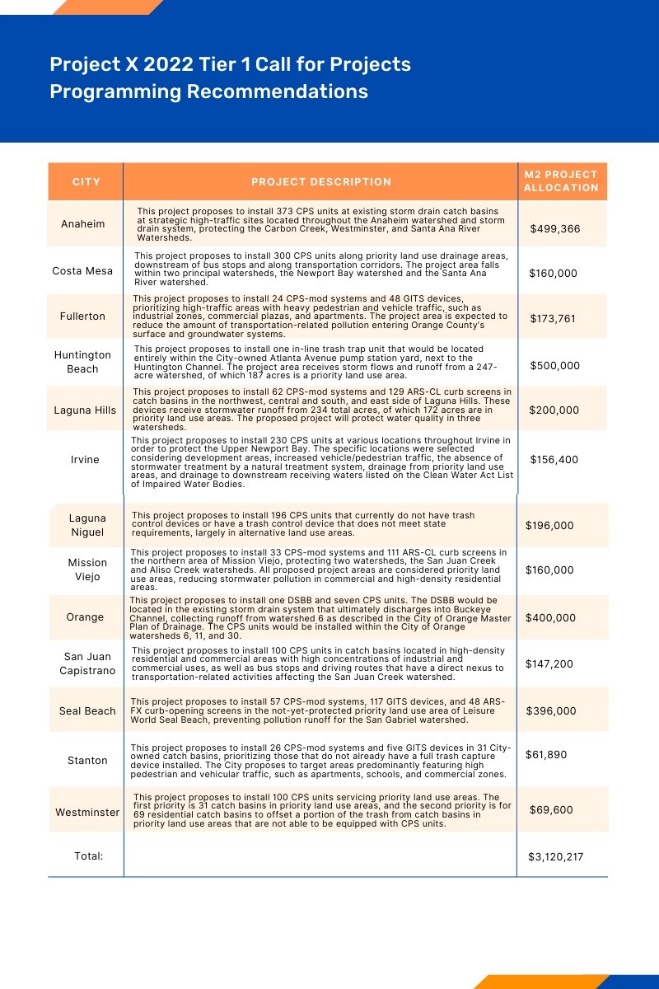 Click here to view larger. Funds will go to 13 cities for 13 projects to reduce transportation-related pollution in water that drains into rivers and the ocean.

The Orange County Transportation Authority board has approved investing nearly $3.1 million to improve water quality throughout Orange County in cities from San Juan Capistrano to Stanton.

The funds come from Measure M, the half-cent sales tax renewed by Orange County voters in 2006 for transportation improvements. Measure M, also known as OC Go, includes funding for an environmental cleanup program that awards funding on a competitive basis to cities and the County of Orange for projects with a transportation nexus that reduce impacts to water quality.

“These projects are one way that OCTA can take the lead on protecting Orange County’s natural resources while improving and maintaining our transportation network,” said OCTA Chairman Mark A. Murphy, also the Mayor of Orange. “This funding demonstrates OCTA’s commitment to investing in both of those goals.”

The OCTA Board of Directors approved $3.1 million for 13 projects focused on removing litter and debris from roads before reaching waterways and the ocean. These projects include purchasing or upgrading screens, filters and inserts for catch basins, as well as other devices designed to remove pollutants.

The OCTA board has approved funding for 212 projects since the inception of this program in 2011, totaling more than $33 million. It is estimated that more than 45 million gallons of trash has since been captured as a result of the installation of these devices. 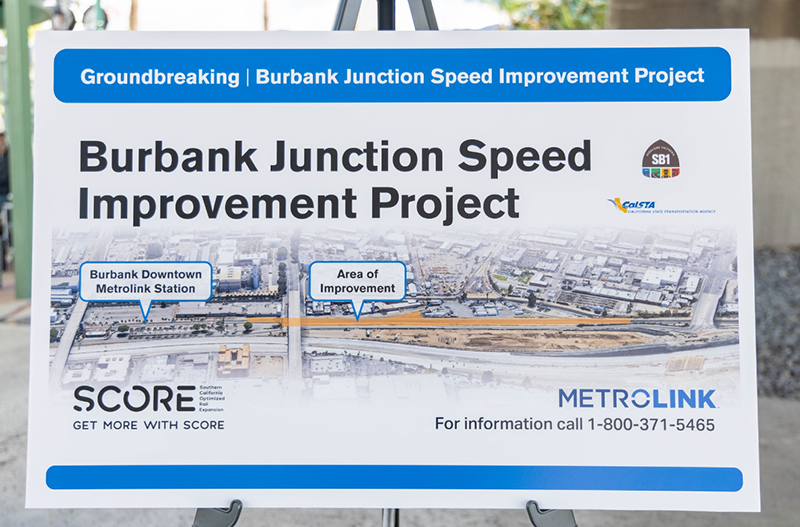 Earlier this month, Metrolink held a groundbreaking ceremony at the Burbank-Downtown Station to mark the start of the Burbank Junction Speed Improvement Project. The project is part of Phase 1 of the agency’s Southern California Optimized Rail Expansion (SCORE) program and aims to reduce travel times by allowing for increased speeds and more efficient operations. These improvements will lay the groundwork for the potential to provide passengers with wait times of no more than 30 minutes.

“By improving track infrastructure, the Burbank Junction Speed Improvement Project is an important step toward greater regional mobility, while delivering economic growth through new jobs,” Metrolink Board Chair Ara Najarian said. “Metrolink appreciates its partnership with the City of Burbank on this enhancement and looks forward to working with other cities and agencies as our SCORE projects evolve.”

ical advancements made during the last 50 years. 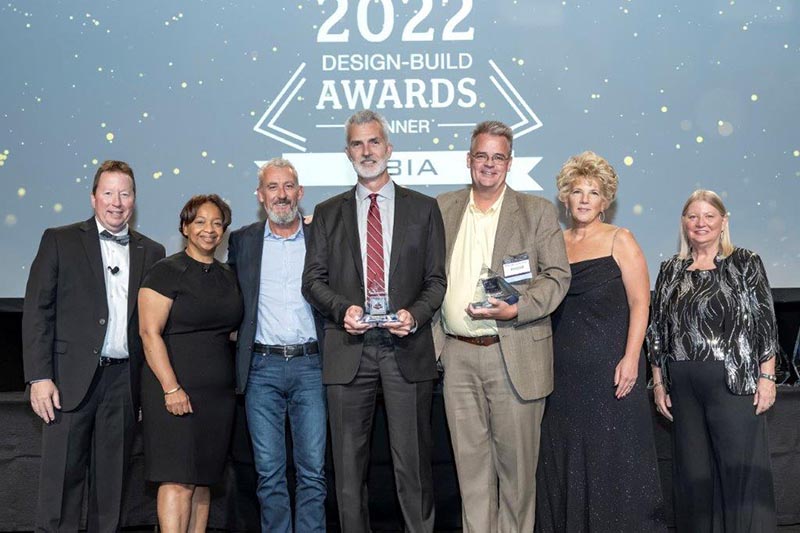 The Design Build Institute of America selected the Riverside County Transportation Commission’s Interstate 15 Express Lanes for its National Award of Excellence in the transportation sector this month. The project was one of three chosen as national finalists, with the 15 Express Lanes emerging as the top winner.

Extending 15 miles in the I-15 median through Corona, Norco, Jurupa Valley, and Eastvale, the project opened in April 2021 following three years of design and construction activity. The project was recognized for its excellence in delivery, innovative construction methods, and commitment to design-build best practices.

Design-build refers to a process in which a single entity designs and builds a project. This approach typically leads to faster project delivery, greater teamwork and communication, and a single point of responsibility, compared to the traditional design-bid-build approach, in which one firm designs the project and another firm builds the project.

The Burbank Junction Speed Improvement Project, located north of the Burbank-Downtown Station, will realign a portion of existing main line track, reconfigure and lengthen track, improve and replace approximately one half mile of existing track and install new right of way safety fencing.

“It’s an exciting day for Metrolink as we begin work on this project that will eventually deliver more efficient train travel in the region, especially for riders along our Antelope Valley and Ventura County lines,” Metrolink CEO Darren Kettle said. “Metrolink’s SCORE program will, over the next few years, add more track while improving grade crossings, stations, and signals for our riders and in preparation for the 2028 Olympic and Paralympic Games.”

The Burbank Junction Speed Improvement Project is funded by the California State Transportation Agency (CalSTA) through Transit and Intercity Rail Capital Program (TIRCP). Construction is scheduled to be completed in the Summer of 2023. For more information, please visit: metrolinktrains.com/SCORE. 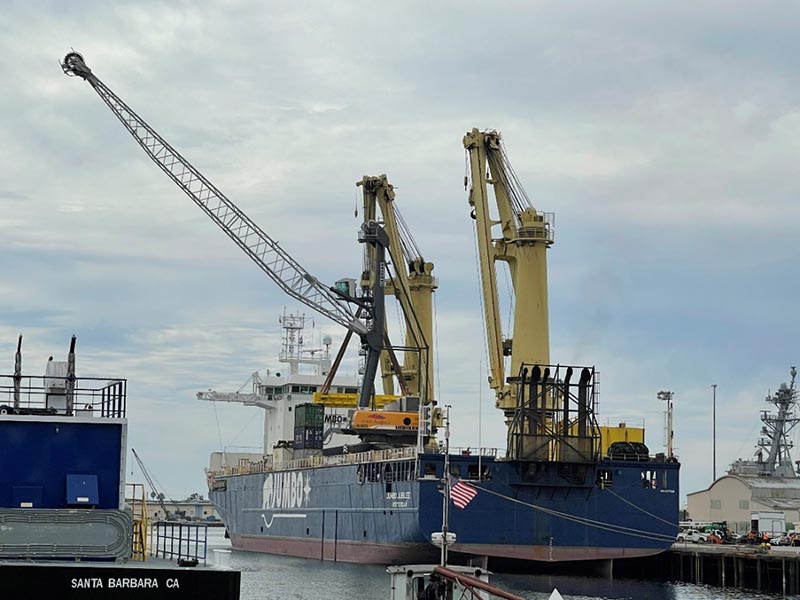 Going Electric at the Port! New Arrival of Electric-Hybrid Crane

The Port of Hueneme, known as the fourth largest container Port in California, welcomed another electric-hybrid crane–an investment made by Ports America stevedoring. The crane’s arrival marked another important step in the Port’s partners continued investment in zero-emissions technology and focus on operational reliability, as the new crane is also going to be replacing another one that’s going to be decommissioned.

“We congratulate our Port partner Ports America in its newest $7,000,000 investment in Ventura County’s Port and in helping us continue on our legacy as the greenest Port in the country,” said Oxnard Harbor Commission President, Mary Anne Rooney. “This brand-new electric-hybrid crane will make us even more competitive for future grants and will help us achieve our path towards Port decarbonization much faster.

Ports America, the largest terminal operator and stevedore in the U.S., continues to invest in new environmentally friendly crane equipment at the Port of Hueneme. Ports America handles Chiquita and Del Monte’s weekly fresh fruit vessel arrivals to the Port of Hueneme with 3 mobile harbor cranes. While other Ports on the U.S. West Coast posted drops in volumes, the Port of Hueneme is the only Port that had an increase of 33 percent of cargo volumes in containers in August 2022 compared to previous year, making the investment in cargo handling mobile container cranes critical for its continued competitiveness and customer service levels. The top reefer container commodities that the Port exports are frozen and fresh potatoes, apples, cheese, cotton, citrus and fresh grapes grown in California. Some of its strongest import volume commodities as seen on grocery stores shelves are the bananas, avocadoes, melons, and blueberries.

“The important addition of another Liebherr electric-hybrid mobile crane provides our customers the needed support and service for years to come and will further enhance the ongoing applications of green initiatives,” said Ports America General Manager, Casey Dexter. “Ports America is committed to the Port of Hueneme and its community.”

The Port continues to aggressively pursue efforts to reduce air emissions while moving essential fresh produce cargo, as the specialized reefer Port on the West Coast and providing growth for quality, high-paying jobs in the transportation, logistics and maritime sectors in Ventura County. Recently the Port installed high-grade air-quality monitors at Haycox Elementary School in Oxnard, Calif. to continuously monitor emissions in the area and track the Port’s emissions reductions improvements. “The Port is committed to a future of zero emissions and appreciates the efforts of our customers to do their part,” said Kristin Decas, CEO & Port Director. “With the arrival of this asset, the Port is able to optimize efficiency, reduce emissions, and support our hardworking labor force.”