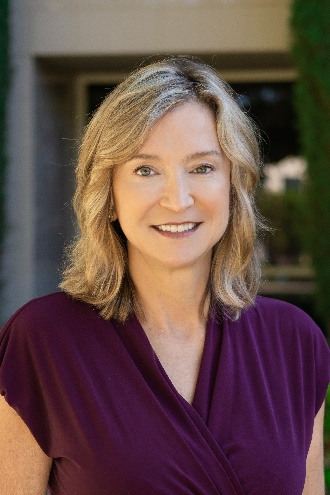 Valarie McFall serves as Acting Chief Executive Officer of the Transportation Corridor Agencies (TCA) — formed by the California legislature in 1986 to plan, finance, construct and operate the largest network of toll roads in the state.

For more than 25 years, McFall has successfully developed strategies to strengthen communication and build relationships with the region’s transportation agencies to keep TCA at the forefront of the tolling industry and The Toll Roads as a vital transportation link in Southern California. Through her expertise and professional affiliations with various industry and governmental organizations, she has led by example, breaking down barriers and acting as a voice for female professionals in a male-dominated industry.

Since joining TCA in 2000, McFall has held senior positions of increasing responsibility. Prior to being named TCA’s first Deputy CEO, she served as Chief Environmental Planning Officer, responsible for managing TCA’s 17 mitigation sites spanning more than 2,200 acres of protected open space. Her efforts yielded significant results, including the preservation of multiple key properties throughout Orange County to ensure the continued presence of important native habitat for wildlife species and the protection of core wildlife linkages running from the coast to the inland portion of the county. Her expertise in public policy with an emphasis on environmental and regulatory sectors have proven instrumental to TCA’s completion of the South County Traffic Relief Effort and advancing the 241/91 Express Connector Project — two critically-important, large-scale projects that will provide countywide and regional congestion relief.

McFall earned a bachelor’s degree in environmental analysis and design from the University of California, Irvine. She is an active member of the Orange County chapter of Women’s Transportation Seminar (WTS-OC), serves on the board of directors for the Natural Communities Coalition of Orange County and is a member of the Southern California Association of Government’s Technical Working Group. She is past vice chair of the Center for Demographic Research at California State University, Fullerton and past vice chair of education for the Urban Land Institute’s Infrastructure Initiative Council. In 2020, WTS-OC named McFall Woman of the Year for her leadership in transportation and outstanding contributions to the transportation industry. 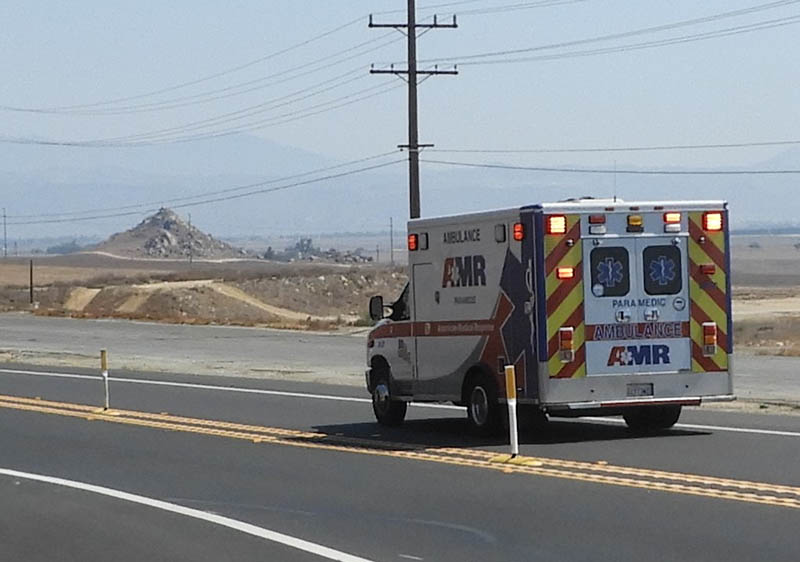 RCTC is seeking grant funds from Solutions for Congested Corridors and Local Partnership Grant programs funded by the Road Repair and Accountability Act of 2017. If awarded, RCTC will use the funds for two critical projects in Riverside County: Metrolink Double Track Project: Moreno Valley-Perris and the Mid County Parkway Ramona Expressway.

The projects are vital components of RCTC’s vision to implement safe multimodal solutions in communities near Perris and the San Jacinto Valley. Riverside County’s population is the fastest-growing county in California and the fifth fastest-growing in the country. These communities are ground zero for that growth.

Your voice matters! Please join Riverside County residents and businesses to show your support for one or both projects by adding your name in RCTC’s applications for state funding grant applications. Register today at https://www.rctc.org/support-metrolink-double-track-mcp-ramona.

Orange County Transportation Authority CEO Darrell E. Johnson, center at podium, is joined on Monday, Sept. 26 by current and former board members in a commemoration of 50 years of public bus service in Orange County. They are backed by a current zero-emission bus and a diesel bus from 1972. Photo courtesy of OCTA.

The Orange County Transportation Authority commemorated 50 years of public bus service in Orange County recently with an event attended by former board members and staff, including the first general manager of the bus system.

The gathering at the OCTA headquarters in Orange included a vintage 1972 bus with the original OCTD logo – when the buses ran for the original Orange County Transit District.

Pete Fielding, the first OCTD general manager, was on-hand representing that era, when Richard Nixon was president and the same year Atari introduced Pong as the first commercial video game.

Parked next to the half-century-old diesel bus was a modern zero-emission OCTA bus powered by hydrogen fuel-cell electricity, with power steering and air conditioning – all technological advancements made during the last 50 years.

After the event, additional small commemorations were being held with employees at each of the OCTA bus bases so all employees could mark the special occasion.

“Public transit service has come a long way since those early days of a handful of buses, growing into a thriving and vital public transit system that helps tens of thousands of residents, workers and visitors get where they need to be every day,” said OCTA Chairman Mark A. Murphy, also the Mayor of Orange. “That would not be possible without the hard work of hundreds of coach operators, maintenance workers, and operations staff who keep the county moving safely.”

OCTA began the 50th anniversary commemoration earlier this year by offering free bus rides all day on Sept. 1. That day, ridership reached approximately 106,000 boardings, a record for the year.

OCTA continues to grow its bus ridership, which fell sharply during the pandemic, from approximately 120,000 daily boardings down to 33,000 during the worst of the pandemic.

With efforts to bring back existing bus riders and innovative efforts to attract new riders, the daily average has rebounded to approximately 100,000 boardings on an average weekday.

Bus service in Orange County began in fall 1972 when the then Orange County Transit District began running five leased buses on just three routes. Those routes in North County served about 25,000 boardings in the first month. The price to ride the bus back then: 25 cents. 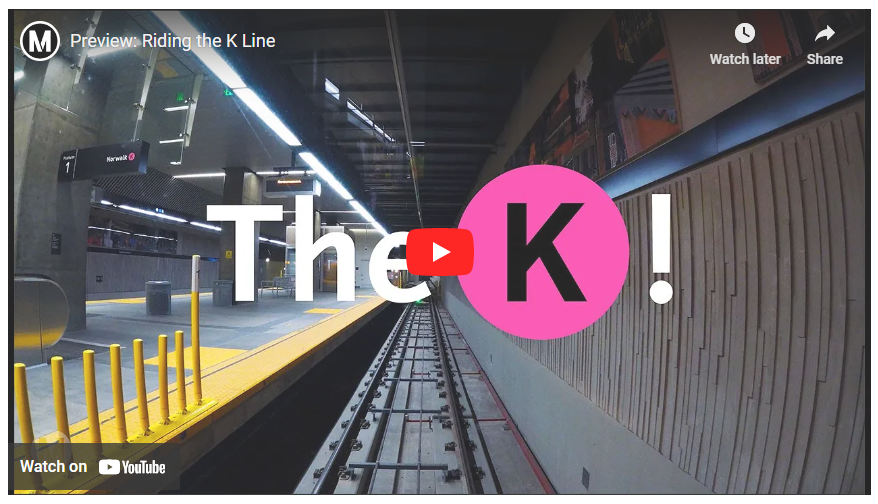 After many years of waiting, the first segment of the K Line is open to the public.

There has been talk about improving or restoring rail transit to the Crenshaw Corridor since the late 1940s. That is not a misprint. The K Line is finally happening because L.A. County voters in 2008 approved a half-cent sales tax (Measure R) to fund many projects, the K Line included.

The K Line’s first segment to open serves the Crenshaw Corridor, Inglewood and Westchester. The K Line will speed up transit, add capacity to our system and will be a key first step toward a rail corridor that will one day stretch from Torrance to LAX to the Crenshaw Corridor to West Hollywood and Hollywood. More below on that.

We want to emphasize: this is the first K Line segment to open. We’re not done!

The K Line’s Aviation/Century Station is expected to open in 2023 along with a rail connection to the C (Green) Line.

The LAX/Metro Transit Center Station along the new K Line tracks is under construction — at Aviation and 96th — and is planned to open in 2024. That station will serve as the transfer point between the Metro system and the LAX Automated People Mover that will take riders to and from airport terminals.

The building of that station involves work along the new K Line tracks — the reason why we’re not opening the K Line to Aviation/Century and the C Line at this time. We want to keep workers safe and we want to get the work done as quickly as possible.

This segment of the K Line is the first step in a much longer north-south rail corridor. The extension of the C Line to Torrance is in the environmental study phase, as is an extension of the K Line north to Wilshire Boulevard and the D Line, West Hollywood and the B Line in Hollywood. These are longer range projects. But both already have hundreds of millions of dollars of local funding thanks to sales tax measures approved by L.A. County voters in 2008 and ’16.

The K Line helped Metro pioneer three key programs that are now here to stay. Our Business Interruption Fund and Business Solutions Center helped local businesses during construction — and will be deployed to other Metro transit projects. Similarly, our Project Labor Agreement helped local workers get jobs building the K Line, providing many a pathway to a new career.

Finally, this: we broke ground on the K Line in 2014 and we know that construction of this $2.2-billion project has been a slog, as is often the case for major infrastructure projects.

We cannot thank enough the residents and businesses along the rail line for their patience, support and oversight of this project. In the days and decades ahead, the K Line will carry tens  of millions of people. Not only will the rail line better connect our region, but it will better our region to the world via LAX.

Please join us in celebrating this victory for Southern California. We can’t wait to see everyone on board. 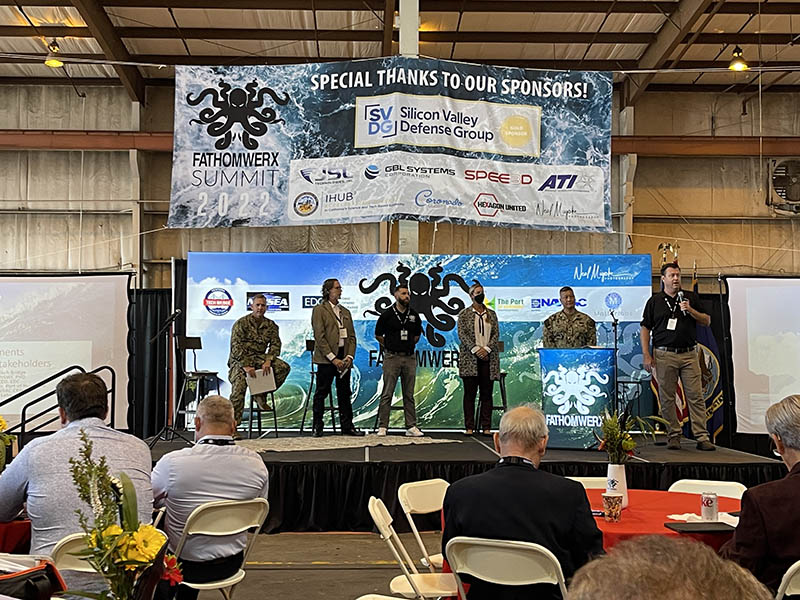 Opening day of the 2022 FATHOMWERX Summit was a success with hundreds of people representing partner organizations gathered to explore the intersection between technology and the Department of the Navy. The two-day event was held at the FATHOMWERX Lab located at the Port of Hueneme.

The FATHOMWERX Summit is open to people working in the tech industry, academia, and government as well as active duty and retired personnel.

“We support the men and women in uniform through our collaboration,” said Jaeger. “The partnerships with small businesses could not happen without economic support.” Attendees at the FATHOMWERX Summit held at the Port of Hueneme gathered to explore the intersection between the Navy and technology industries.

The day’s agenda was packed with speakers and exhibitors as well technology demonstrations, tours of the Port and FATHOMWERX Lab, and interactive panel discussions focused on emerging and existing technologies.

“Creating an environment for economic success and doing everything to facilitate communications to create job opportunities while contributing to the nation’s defense is important,” said Bruce Stenslie, President & CEO of the Economic Development Collaborative.

The FATHOMWERX Summit provides an opportunity for technical and operational stakeholders to discuss gaps in capabilities and work together on new technological solutions.

Bryan Went, CEO of Matter Labs, said FATHOMWERX is not just a physical space, but a community for tech creators. “If you have a solution, come show us,” Went said. “If you have a need, come tell us.”

The event was created to accelerate information exchange and reduce risk for implementation via testing of technology in the field as conducted by the Navy, the Port, and other partners in the public and private sector.

“Each year, we are excited to support our maritime partners through this annual summit partnership,” said Kristin Decas, CEO & Port Director. “This inclusive event leverages the unique resources and infrastructure available at the Port of Hueneme as well as highlights the advancements in tech industry and its usage by the Navy.